I love mythical and mysterious stories about automobiles.  I found this one to be gloriously interesting and imaginative.  For many years, people outside of North Carolina had wondered if there was any truth to the ‘supposed’ existence of an AMC dealership in Pikeville, NC.  AMC, of course had been destroyed/shut down as a company in 1987 after being purchased by Chrysler, in an awful mess of 80s corporate destruction. Obviously the people in North Carolina knew the truth about whether the dealership exists or not, however people from outside had to go and find out for themselves…and this is what they had found:

IT IS STILL THERE! and it is functioning….well…sort of!

“If you’re an AMC fan, you would be in seventh heaven, surrounded by the remains that by my count exceeded more than 100 AMC cars. I could see that these cars, predominantly from the sixties and seventies–though often obscured by tall weeds–were for the most part intact. Others were in various states of disrepair, and some were in the later stages of decomposition.” (Rich Truesdell wrote this and more on the Automotive Traveler site)

More pictures I got from that Automotive Traveler post, along with additional searches: 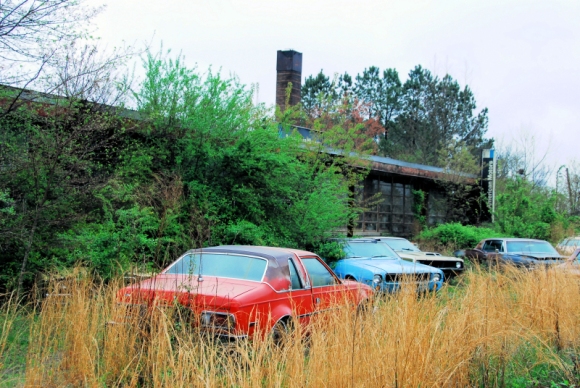 Read about the visit there: