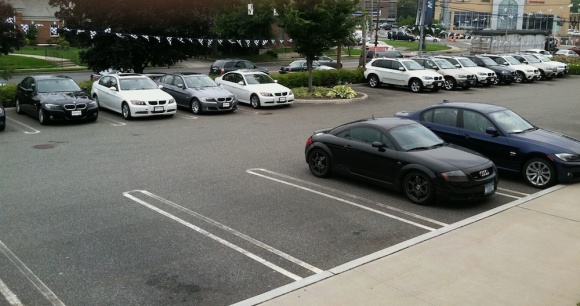 Yes that’s right IEDEI is shopping for a car!  It has been 8 years since I last went ‘real’ car shopping, and how I have missed it.  Yes you have to deal with misinformed salespeople, plenty of fluff, weird business tactics, temptations on the used car lots, and pricing shock after adding a couple of choice options—-however I, for one, believe that car shopping should be the next big thing sporting event.

I want to give the TT a break and I will be keeping it.  I have had the TT for 8 years now and the car now has 115k miles.  It has done its job and I want it to relax and stay as my “fun car”.  My wife and I have plans to ‘expand the family’ in the next year or so, as well as my new job which is why I am shopping cars.

So you would think that car shopping for me would be quite easy—-as I would just head over to the nearest Audi dealer and buy up the whole facking place——however I do have budget constraints, and I do have a very open mind when it comes to buying.  The last time I went car shopping, I drove many, many cars and the whole experience was very satisfying.   That being said, my choice last time was MUCH easier because a long story short—-i was obsessed with the TT.   This time? YES there is a top contender, however it is not an obsession—-just a top contender.  More about that car at a later time.

As a child, i grew up wanting an E30 M3.  As an adult, I find modern BMW styling to be more boring than watching a baby elephant drool into a lake.   I didn’t feel exactly compelled by the dated design of the aging 3-series sedan (E90), however I felt the car met several key preferences I have in a long distance commuter family sedan (AWD capabilities, sporting performance, solid, small size, preferably german).  The front of the car has sort of a “japanese” look to it—-i don’t find it very interesting, in fact i find it very scattered and haphazard.  Too many shapes with incoherence.  The rear end is far better than the front, but seems a bit “scrunched” together.  The side profile was nice, sometimes…The sculpted hood is overstyled, like a monster’s face in a cheap horror film—-and overall, the looks just don’t work for me.  There isn’t much classic about this E90. 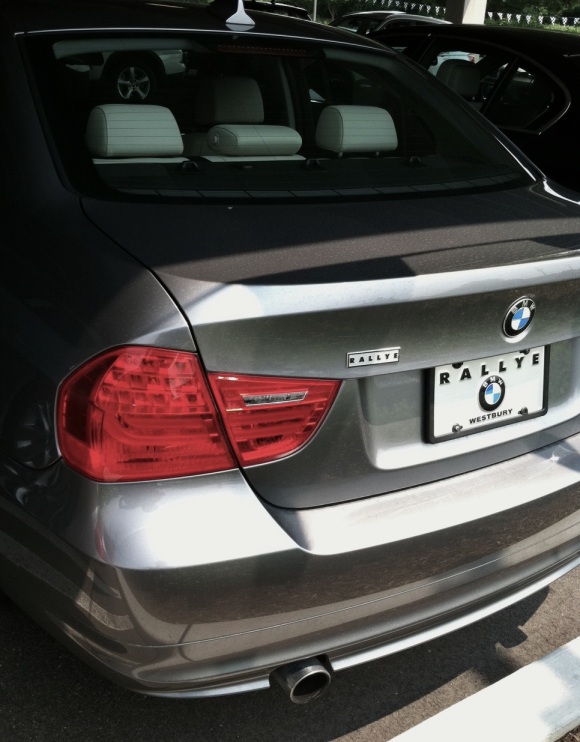 Amongst the things I evaluate cars for, interior is amongst the highest of importance.  Why? Because as a driver, the interior is really THE interface for us when spending time with the car.  The TT has quite simply one of the finest interiors of any production car in the past 50 years—-it was also one of the most expensive production interiors and it shows.  On the downside, this has given me a very high standard to evaluate other cars’ interiors with.   In the 80s/90s, BMW had it all going right—with minimalist, functional interiors which got the job done and had bags of integrity.  In specific, i’m going to point out that terrible rubber piece located above the steering wheel like a sideways clitoris connecting the dash cluster area to the top base of the wheel.  What was that!?   The seats were pretty lousy as well—-you can see the lack of good bolster on the sides….the leather felt thick and grainy like it was taken from a dinosaur….worst of all, things felt cheaper than they should feel.  I also found the “double bubble” navigation screen area to be very awkward, although it did keep the display in level with the driver’s vision.  The MMI/iDrive system was actually pretty nice, much nicer than any of the Audis I have used with similar features.  The gauge cluster was well made and one of the high points of the interior, with one of the low points being the controls and handles on the door–which were woefully planned and placed.   All in all, a very schizophrenic interior, not a particular nice place to be.

Backseat room was very nice, and i was surprised by how much room there was for a compact sedan—-trunk size was not as nice as i’ve seen in the C-Class and the A4.

Having driven a fair number of modern BMWs in my life—I do know one thing: that they are often much better to drive than you think they will be based on other criteria.  This was true today as well.  The engine is a 300hp Turbocharged 3.0L straight-6.  A couple of things surprised me about this engine: (A) there isn’t much turbo lag, and (B) it sounds pretty decent.  The power is instant and with a surge of turbocharged boost.  To me, this is the essence of BMW, as we often forget that BMW originally launched the first mass produced turbocharged automobile to the mass market in 1974 with the BMW 2002 Turbo.

They didn’t have any manual transmission cars to drive, so I drove one with a ‘Steptronic” automatic transmission.  It is very dissappointing that BMW does not offer a dual-clutch optional gearbox in their non-M car lineup.  The Steptronic did not have paddle shifters, and to be honest the gearbox was slow and a bit cumbersome to use.  I felt better driving the car in fully automatic mode rather than “pseudo-manual”.  The brakes were excellent and felt good under hard braking and panic stops.

The steering is one of the major high points on most BMWs, and it felt pretty good on the 335i.  It felt accurate and communicative like a bullet fired by a sniper. Coming from a small coupe, i thought the car did feel large—however most family size sedans would feel that way.   The 335i did feel agile though, and was most definitely able to handle aggressive steering exercises with relative ease and composure.  Fortunately i had a sales person who urged me to test the car hard, which i did.  Since the 335i is RWD all the time, until it detects slip—-the car handles great in everyday normal driving—with the steering free from powertrain expenditure.

All in all, the driving experience was a good one.  The car feels solid as any BMW should, and it feels alive like a lizard who is being chased by a cat.  The car instills a sense of confidence in it as any good german car should, and I give credit to BMW for mass producing their mainstream compact executive sedan without comprimising the driving characteristics which have made them desirable.

I like the BMW 335i “x-drive” for what it is; a solid german sedan with all-weather capabilities and RWD useability.  Do i think it is something special? NO.  Do i think it is overpriced? YES.  I sat with the salesperson and equipped the car with a ‘sports package’, leather (why in the world is leather optional on this!?), heated seats, and a couple other small things—–and the price of the car was $48k+.  Would i pay $48k for this car? NO.  Then the truth hit me—the lease price they were offering me on the car was WAY less than the finance price on the car—-together with the facts the dealer was telling me about 90% of their customer base leasing their BMWs over buying it—the car suddenly made a lot more sense.  That being said, 335i is a very good car, lacking the attention to detail which would make it special.  You can tell that this car is built for one reason; for corporate leases for corporate people climbing the ladder who want to aim for a 5-series the next time, and a 7-series after that.  I have friends who have leased 3-series sedans repeatedly one after another—-and this really does seem like the dynamic BMW are aiming for.  That’s what the car is made for.  I walked away with a little more respect for the car after driving it, however I walked away not wanting it as well.

NEXT TIME FOR REVIEW: 2011 Mitsubishi Evolution 10