“C’Etait Un Rendez-Vous”: the Mercedes that could.

I first saw “C’Etait Un Rendez-Vous” about 7 years ago, and was absolutely blown away by it.  I used to watch it every day for a while.  A couple of years later, after speaking to a ‘car guru’ friend of mine, I learned that the car in the short film was NOT a Ferrari 275 GTB, but a Mercedes 450 SEL 6.9, which was later admitted in interviews by Claude Lelouch, maker of the film.  Since then, i’ve made it my duty to point this out to almost everyone who seems to think it is a Ferrari 275 GTB, the same thing I USED to think—until i was told the truth.

The sound of the engine, has been rumoured to be overdubbed from a Ferrari 275 GTB, something I feel to be consistent with the sound—unless proven otherwise by some other documentation.

I found this sweet photo of Mr. Lelouch mounting his camera kit on the SEL @ The Torrible Zone 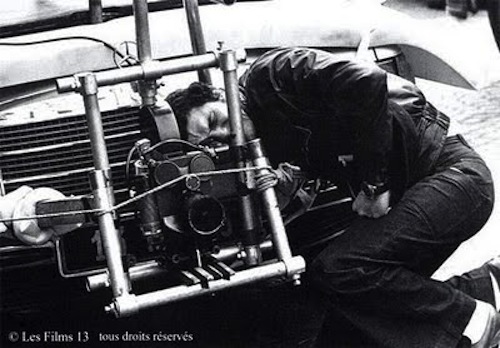 I’ve seen this clip about a million times, but I suppose for context and for people who have never seen it—-it is worth reposting here.