the best thing to ever come out of Ferrari… 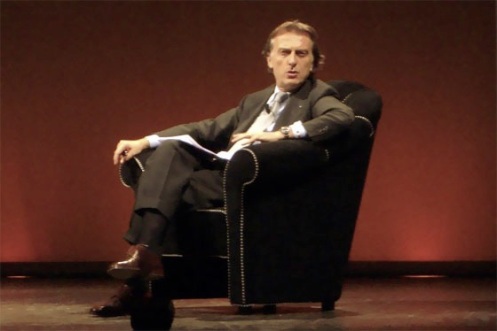 Yeah I don’t give a crap about Ferrari—it’s a vulgar company who have built the most overrated, cheesy, and overhyped cars of my lifetime.  They’re like the ‘jocks’ of the automotive world…ready to strangle automotive journalists with their sweaty, annoying jockstraps.

BUT TODAY I read a statement by Luca Di Montezemelo (CEO of Ferrari) which made my heart turn all fuzzy and warm—although the statement involves Ferrari’s future plans, what warmed my heart is their resistance to join the overwhelming surge of electric cars.  My favourite marques Audi and Porsche have also recently joined into the electric car frenzy with their own projects; which has caused me a certain amount of interest to see what they’ve come up with, but a certain amount of disappointment at them selling out to the frenzy.

What did Mr. Di Montezemelo say?

Very cool.  I’m glad someone had the balls to say it.  Too bad his next line was “But we are working very, very hard on a Hybrid Ferrari”…..oh well, i didn’t expect them to completely stray off the beaten path.