Finally after hearing hype for the past several years about the legendary Audi R8, I finally was able to get an unhinged, 30 minute drive of the R8 V10 Spyder during my fantastic trip to Petit Le Mans this past weekend.

So let me be very straightforward like a bow and arrow when I say that all the hype you’ve heard about the R8 is very much true.  This was quite simply one of the greatest cars i’ve ever driven, and i’m not just saying this because it’s an Audi—–i’m saying this because this has to be the greatest combination of driveability, exclusivity, desirability, and character in a car i’ve felt in a long time.

I’m not a convertible type of person, and originally I had asked to take a Coupe out for a spin, however when I was welcomed to the area to pick up my car—it was a black V10 Spyder they had signed me up for, and hey I wasn’t complaining.  So on a day where it was 70 degrees and perfect harmony—-i was given the wheel of the R8.

Upon taking a seat in the R8, what struck me instantly is just how fantastically Audi the car was—-the mirror settings, seat settings, climate controls, steering wheel, gauge cluster—-it all felt familiar, and It felt like a direct descendant of my MK1 TT quattro and my 8P A3 quattro.  Audi make the best interiors in the business, and the R8’s was no different—–extremely well made, easy to settle into, and easy on the eyes.  I felt right at home.

The first 5 minutes of driving were taken with ease while I tried to understand WHY the R8 V10 felt so stable, comfortable, and easy to drive.  Could it really be this laid back?  Then as my shoes drove down on the accelerator pedal, I began to hear what was lurking behind me in the mid-engined glory of that 5.2L V10.  The most beautiful, symphonic V10 symphony…..slowly rising as the accelerator depressed.  It didn’t take me long to realise that I was driving a hugely powerful car with massive amounts of grip and control, and I couldn’t help myself to pounding on the accelerator a bit more.  The sound I heard bellowing out from behind me has to be one of THE great sounds i’ve heard on any drive—–the most beautiful velvet growl and organic roar.  The throttle response was instant, the grip was severe and complete with confidence never lacking. 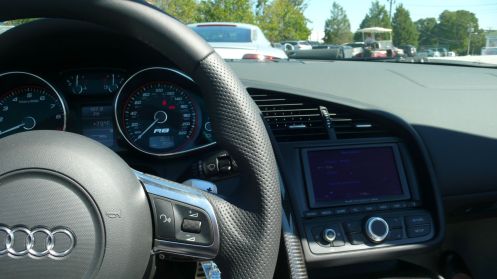 One of the great feelings was planting my shoes into the accelerator at full throttle (to the floor) and hearing the V10 at maximum power, the power felt endless, the sound was blistering, and that’s when I understood why someone would buy a Spyder over a Coupe, because the sound that one gets from driving the Spyder is just f*cking sweetness.  On that day, in that car, I’d choose the Spyder.  And you will certainly NEVER hear me ever pick a Spyder over a Coupe in any normal state.  The brakes?  They were phenomenal.  Instant stop with big bite.  The steering was very direct, more than any other Audi i’ve driven—–besides my control-arm modified TT.  The car just felt extraordinarily balanced.

The V10 Spyder I drove had a sequential manual gearbox, which is essentially a single clutch manual transmission with sequential shifting (R-Tronic).  I thought the gearbox was going to let me down—-but it didn’t.  Each gear is shifted like a manual, and jolts the driver (even more so than a regular manual) and shifts instantly.  It feels like a race car—-and to me the R-Tronic is very impressive.  More so than I expected—–but that being said, i’m a HUGE fan of these electronic manual transmissions.  They are better than manuals and to me, just as enjoyable.

Negatives? I honestly can’t think of any.  I have been sitting here for 10 minutes trying to think of some, but the only things I can think of is that I wish the wheels were darker, and that the windshield wasn’t surrounded in silver.  Aside from those small cosmetic issues (which can easily be changed), there is nothing lacking in this car…. 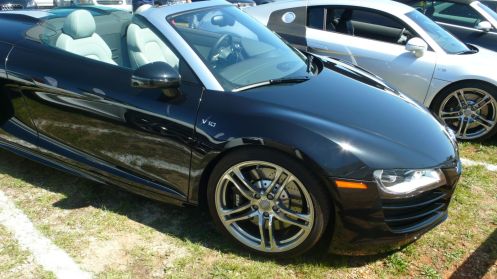 So all in all, the R8 is an absolute sensation.  So easy to drive, an amateur can drive it—–but so vivid and entertaining that an enthusiast can envelope themselves within it.  I was speaking with a regional Audi representative about the R8 named Paige (sp?) who told me that in a huge Northeast snowstorm last year—–she drove out into the storm, in an R8 Coupe, on an evening where nobody was on the road—she got to a restaurant to pick up some food and registered looks of shock on the faces of everyone at the restaurant.  It’s not just a sports car, it’s a car for every place and every setting.  Do I want? Yes I want.  Can I have? No, not yet.  Give it a couple of years!  I need time to gather up $150k+! Is it one of the best sports cars in the world? Easily—–is it better than a 911 Carrera or Carrera S? Easily….is it better than a 911 Turbo? I haven’t driven a 911 Turbo so i can’t say…but I can imagine it would be a good comparison.   That being said, all I know is that it’s easily the best car i’ve ever driven.