Here at IEDEI, i try to keep things positive and upbeat, however certain things about automotive design really get me going.  Lately i’ve been noticing alot about the taillights on cars…and how bizarrely they are often designed.  I’m starting to get the feeling that some sap in each company sits around doing the design for the lighting bits, and the tail light guy must be the one everyone makes fun of at lunch time…..well probably not, but it makes me feel better to think he exists and this happens!

So what cars have the WORST, most annoying, ugly, and awkward tail lights on modern cars?  Here are a few…

Whoever designed these taillights should be run over by an Altezza….THIS CAR brought “clear tail lights” to the mainstream! So every pimpled geeky 17 year-old high school student rollin in his junked out 1991 Corolla w/custom tin can rippy exhaust could ‘special order’ himself a set of Corolla “Altezza” cleared taillights.  Oh the horror…..Toyota should be ashamed of itself for introducing such a trend… 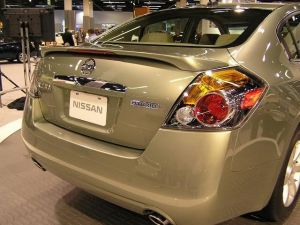 There aren’t too many cars I hate as much as I hate the Nissan Altima.   It is by far one of THE most annoying, common, and idiot-magnet cars on the road today.  I swear that every other Altima i see on the mean streets of NYC are driven by a classless blithering idiot weaving in and out of traffic like a stabbed goat.  Terrible cars, terrible owners, and terrible tail lights designed by someone who thought it’d be cool to go 3D…..guess what, they look like shite maaan! That whole pseudo 3D thing is a miserable failure….looks like several animals were butchered, and then stuffed into a glass cylinder….awful awful. 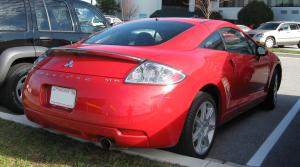 The current-generation Mitsubishi Eclipse is a true loser of a car.  Crap performance, very crappy looks, and horrendous cleared out tail lights (thanks Altezza!…really).  I must admit that i’m not sure if it’s the ill-proportioned car that is making the tail lights worse, or whether they are just rubbish at their steady state normal! 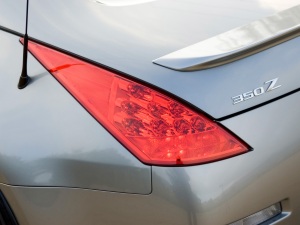 You might start to think that, at this point, I am blindly attacking japanese cars; however it is difficult to deny just how tasteless their design subtleties can be sometimes!  The 350z is another example of a car which just fails on so many levels of design, inside and out.  Aside from being a robotic, warped imitation of the Audi TT design, they decided to turn the tail lights into an elongated spear-shaped trajectory.  This leads to the tail light horizontally invading the side of the car.  Terrible….just terrible.

that’s my shortlist…i’m sure there are plenty more! do you have any suggestions or nominations?