This is a new feature to the IEDEI blog—“Concept Car Wasteland”. This is where we’ll introduce you to a concept (obscure, hopefully), which you had no idea existed.

Here, we love the original Lancia Fulvia from the 60s….and I hope to own one, one day! In 1969, Ghia decided to present a concept version of the Fulvia with their own design cues and deemed it a special version, known as the Competizione. Never seen again since it’s original introduction….this car bears little resemblence to the Fulvia we all know and love—-but definitely has some Lamborghini cues, as well as maybe some Maserati and Alfa Romeo ones as well. Looks very italian nonetheless, and looks very much from the late 60s as it should i suppose! 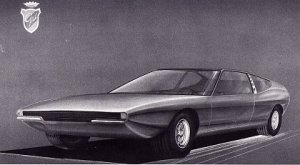