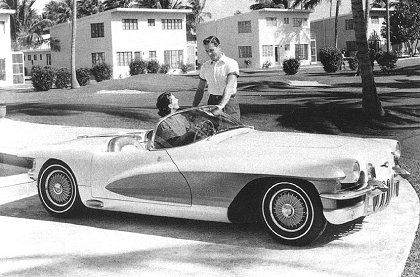 The Cadillac XLR is probably the worst example of Cadillac trying to build its own Corvette…it’s merely an overpriced, overstyled, old-man example of a Corvette.  I’m not sure why ANYONE would buy one.

Back in 1955, Cadillac had a go at reviving the “La Salle” nameplate that they had stopped producing back in 1941.  What they came up with were 2 models, a sedan and a roadster.  The roadster is very interesting, a low slung, strangely designed, overly complex, italian-looking design with some pretty cool design features.  It looks about the size of an original Corvette, and even has some similar proportions—however i think it actually looked much cooler than those early Corvettes.  Harley Earl was in charge of this project as well….and its destiny was solely confined to the concept car wasteland!

This car was sent to the junkyard to be destroyed…..but apparently a man in Michigan FOUND the car there, and has plans to restore it.

recent photo of it: