why can’t modern car magazines be this creative with their covers?  Instead they just put synthetic, advertising-like covers up.  Blah. 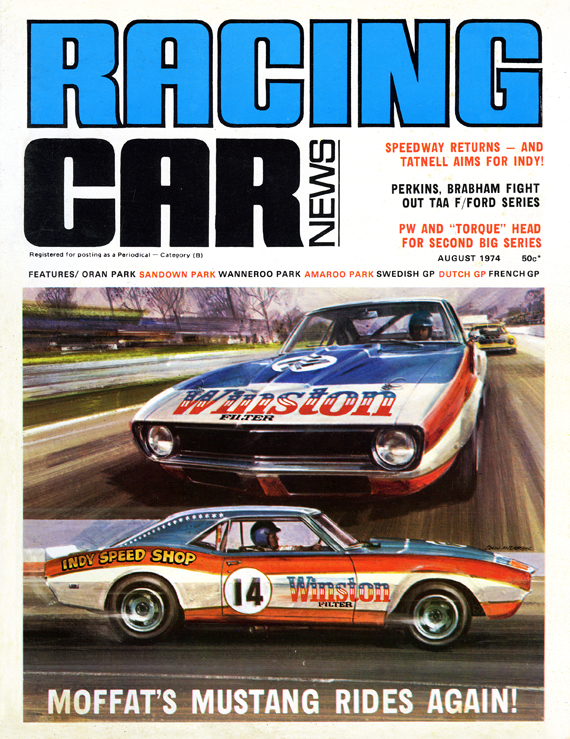 I found these fascinating pictures and words in regards to Ferdinand Porsche proposing plans for a central cockpit rear-engined supercar based off of the winning Grand Prix cars of the time—-sound familiar Gordon Murray of McLaren F1 fame?  So in 1933, Porsche decided he wanted Auto Union to build the fastest, most insane, 4.4 Liter V16 200hp road car able to carry 3 people (including driver), have a centrally seated driver, and with the Auto Union race car engine pounding away in the rear-end of the car.  That idea and drawings were labeled P52 or “Type 52” in 1934.  The 200hp engine would have been a ‘detuned’ version of the 295hp engine in the GP car.  I’m a little bit confused about the total number of seats in the sketches, as some of the pics show 2 passenger seats, while the Komenda sketches above look like there may be a backseat there as well.

Surely this car was a sign of things to come from Porsche—-and as they say, the best ideas are often attempted many times before they actually take off, as i’ve seen in regards to Ferdinand Porsche’s story time and time again.

Here are some original drawings made by Dr. Erwin Komenda (designer of the Auto Union GP cars!) 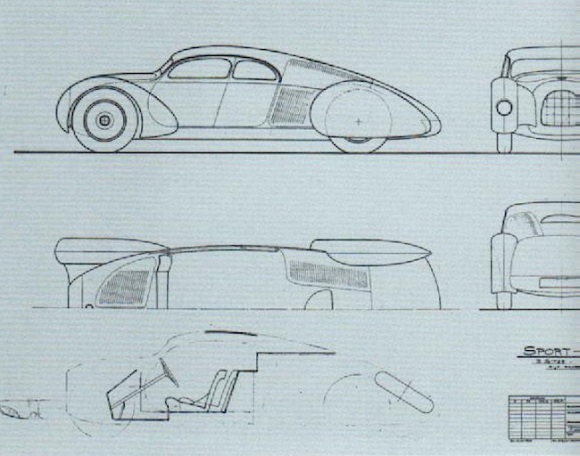 “By early 1934, the road car project had been given its own identity and was designated typ 52. Komenda’s chassis drawings show he had added a longitudinal framework to which the body and large twin exhausts could be fixed. Hubs have also been drawn either side of the V16 to carry spare wheels, presumably in order to afford some luggage space in the rear of the body. The tyres on the road car were to be 5.50×20 all round, rather than the differently sized rubber of the racer.

Although the engine capacity of the Typ 52 was to remain at 4.4 litres (supercharged) the power was to he reduced from the racer’s 295bhp at 450Orpm to a more manageable 200bhp at 3650 rpm. This, the Porsche design team believed, would give the sports car a maximum speed of 125mph in fifth gear and a 0 60mph time of around 8.5 secs, a quite sensational performance for 1934

The limousine would not have been much slower; to put things in perspective it’s worth looking at the performance of what would have been the Typ 52 five seater’s main rival in the mid ’30s*the Mercedes Benz 540K. This behemoth weighed in at a colossal 57121bs, whereas the planned weight of the sports Auto Union was only 38581bs. Even the limousine would still have been a lightweight compared with the Mercedes. To propel its massive 54OK’s 5.4 1itre, straight eight engine managed a paltry 115bhp and an unremarkable 180bhp when the supercharger was engaged.

In 1938 The Autocar tested a 540K, and managed a maximum speed of 104 with an 0-60mph time of 16.4 secs. The Auto Union would have blown the Mercedes away. ( not only, due to its vastly superior power to weight ratio, but also because, aerodynamically, the former would have been as sleek as a speedboat, whereas the Mercedes, was like a galleon set to royals.

Sadly, the Typ 52 project fizzled, and today no one quite knows why. Once Auto Union’s racing programme was under way Porsche’s design team had to concentrate their efforts upon that, but there’s no doubt* the typ 52 could have been built by any one of the four Auto Union member companies, had the will been there.

On the race tracks it soon became clear that Professor Porsche’s mid engine required a special talent to get the best out of it, and it was not until 1935 that an old maestro named Achille Varzi and a young wunderkind named Bernd Rosemeyer managed to do that. It is quite possible, therefore, that Professor Porsche decided his road car would be too much for ordinary mortals to handle, even in detuned condition.

Whatever the reason, the Typ 52 project was allowed quietly to die and the motoring world has had to wait for years for its like* *the McLaren F1, designed by Gordon Murray* to appear. However, had the roadgoing Auto Union been built, we can be sure that our friend Bernd Rosemeyer would have demanded the first off the line. He was like a son to Professor Porsche, who would surely have denied him virtually nothing, recognising the value of having his star driver and his wife seen driving around Europe in his sensational new creation.

We can be equally sure that Bernd wouldn’t have been content with the 200bhp engine that the Professor had in mind for the Typ 52 By 1936 the size of the Auto Union V16 had been increased to 6 litres and the power had gone up to an impressive 520bhp. No doubt Bernd would have insisted upon having at least 450bhp under his right foot, and that would have been Rosemeyer’s Baby!”

(from SMcars.net and the story here)

The following artwork was commissioned by Classic and Sportscar (1984) and is by technical artist Brian Nation to attempt to recreate what a full plan of the Type 52 would have looked like if they had continued with the plan: 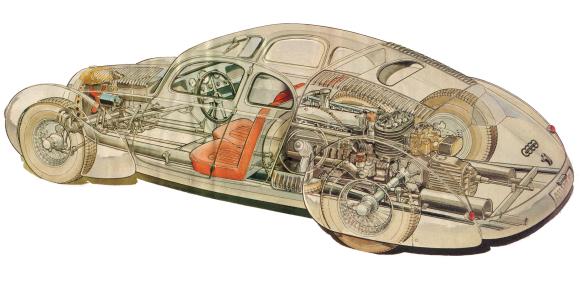 I can’t help but wonder if this car would have been produced—-how big of a shift in standards it may have led to—or maybe it would have just been resigned into the world of ‘unattainable low production failures’ as so many great machines have done so in the past.  Regardless, the story is fascinating….as are most stories about the development of old-school petrol pumping iron.

artist of the day.

I found these stellar manga style automotive art/drawings on DeviantArt with the artist being known as teardrop-sidemarker (aka Will Kingstone).  Very cool stuff… 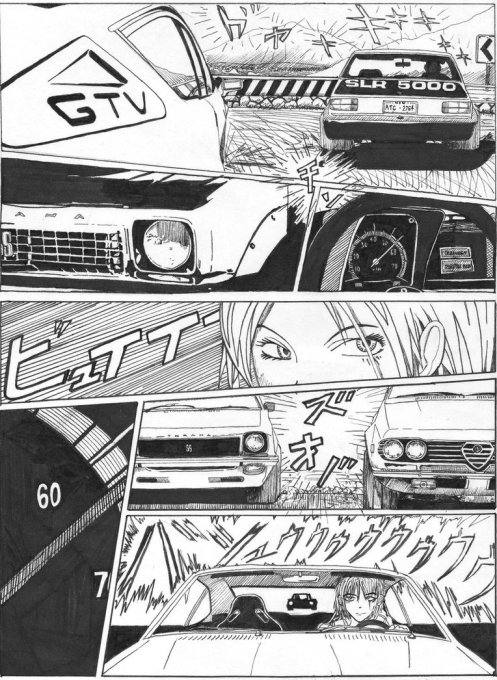 (original modified to perfection by IEDEI, click to enlarge) 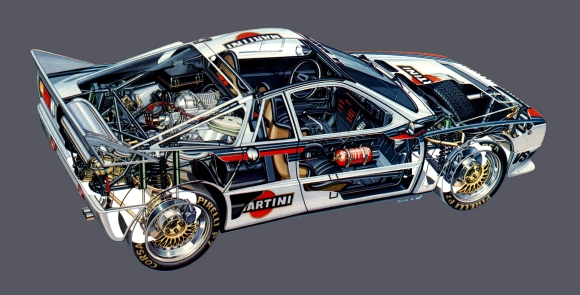 the art of Andrea Del Pesco. 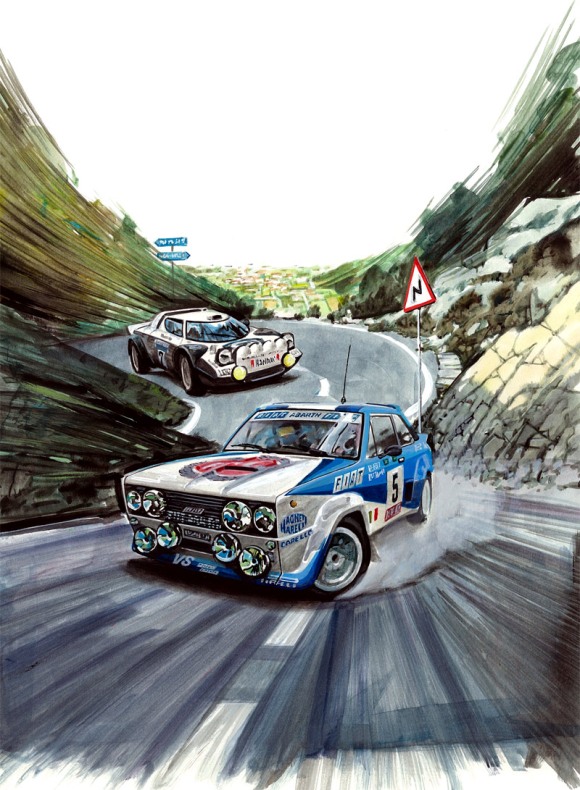